There are many weird and wonderful areas across the world that harbour some pretty obtuse and intriguing buildings.

You may think that every building you see today pretty much looks the same, while this may be true in some cases, (as many must abide by health and safety regulations, etc) there are some maverick designs that have bypassed such demands.

So, with that being said, I’ve scouted some of the weirdest and wonderful buildings for your viewing pleasure. Take a look below! 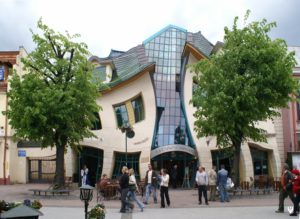 Definitely one of my favourites from the list, this crooked, fairytale house lies within Sopot’s town centre and houses a plethora of shops, whilst also including a few restaurants and even a radio station!

The idea for the Crooked House originated from the mind of Polish illustrator Jan Marcin Szancer and Per Dahlberg, both of whom worked on fairytale illustrations. Despite its intriguing appearance, some tourists have reported that they’re too scared to enter the building due to its questionable structural integrity. 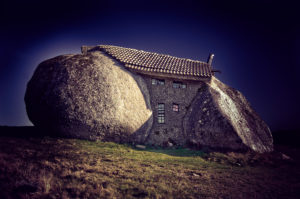 Much controversy once surrounded this house, as people refused to believe it was real, or hadn’t been photoshopped at the least.

The people that doubted the authenticity of The Stone House did raise an interesting point, claiming that all photos of the building had only been taken from two angles. It was only after the Daily Mail and a Portuguese television channel shed light on the infamous Stone House, that people began to believe it was a real structure.

Despite being sandwiched between two sizable boulders, the house is one of wonder and simple splendour. Inspired by the Flintstones, the interior of the house is simple and overall, understated. This is a remarkable property that goes to show not all architectural phenomenons are simply the work of an editor in Photoshop. 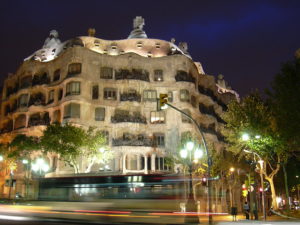 Located in Barcelona, the Casa Mila was built between 1906-1912 by the talented Antoni Gaudi, who later dedicated himself to the Sagrada Familia.

It was made in art nouveau style, which is an art style that embraces intricate decorative shapes and prefers curves over typically straight lines. The entire complex is made out of natural stone, with ceramic tiles surrounding the upper quarters of the structure.

Due to its fascinating architectural structure and design, it received major recognition from scholars and artists across the world. In 1984, it was inscribed on the UNESCO World Heritage list for its exceptional universal value. 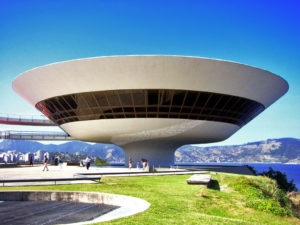 As if pulled from a sci-fi movie in the 80s, the Contemporary Art Museum sits in the city of Niteroi, in Rio de Janeiro and remains one of the city’s main landmarks.

It was designed by Oscar Niemeyer, with the assistance of structural engineer Bruno Contarini. The iconic sci-fi design was meant to evoke an ‘elegant, curvy structure that rises from a water basin, creating an ambient sense of lightness.’ Despite many people (myself included) claiming it looks like a UFO, Niemeyer’s intention was for the structure to evoke a flower, that continues to grow and spread, as if it’s rising from the rocks.

The Church of Hallgrimur, Iceland 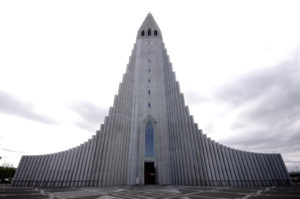 Looking like something taken straight out of a fantasy film (or Lord of the Rings), The Church of Hallgrimur was constructed in 1974 and sits on a high hill located within the centre of the city. It is also considered to be one of Iceland’s most striking landmarks.

The church itself was named after Hallgrimur Petursson, an Icelandic poet who composed the Passion hymns, which are still sung in the church today. The striking design of the church was supposed to resemble Iceland’s natural landscape, including its volcanos, ice caps and basalt columns.

Hallgrimur took around 38 years to build and boasts a massive pip organ, consisting of a 50 foot case and 5,275 pipes. 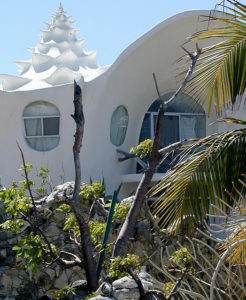 The Shell House, located in Isla Mujeres boasts one of the most fascinating holiday homes in the world, with your own private pool surrounded by coconut trees, tropical plants and even the odd, curious iguana.

Despite the house being situated right beside the beach, the main attraction remains its incredible architecture. This is definitely one place you must come if you ever find yourself in Mexico. Be warned, however, as the waiting list for this property may be quite some time! 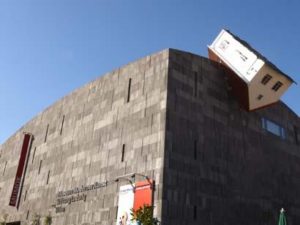 We always save the best till last, and the House Attack structure is certainly a sight to behold. The artist behind House Attack is none other than Erwin Wurm, who has become known throughout the world for his eccentric and occasionally puzzling work. What separates this piece of work from any other is that it sits in plain sight and looks as if this was some sort of freak accident.

The ‘art’ was supposed evoke a sense of fear when walked under, as it looks as if the house could fall on top of civilians walking past at any given moment.

Did you enjoy my list of intriguing buildings? There are plenty more sites across the globe that I’ve left out, these are just a few of my favourites. Do you know of any better sites? Have you been to any of these? Let me know in the comments below!