Sometimes you may find that your small garden project has now turned into a much bigger and trickier project all together. Here at Mteevan Hire we’re on hand to provide you with the most up-to-date mini excavators on the market.

Although they make up the smallest class of excavators, mini excavators are not as small as their name might suggest. Mini, or compact excavators can weigh up to 850kg and whilst they are small in size, they come with varying and very intricate features.

So, with that in mind, here is a list of the 5 best excavators of this year:

Operated via a diesel engine at 24.8 horsepower and produces maximum rev of 2,200rpm. An additional feature of this model’s configuration is that the models with long and extendable arms have turbocharged engines to cope with additional weights.

All three models come with rubber tracks, but steel are also offered as options. Rubber tracks are obviously gentler on pavements, landscaped areas and cause less surface damage. They are however, not as durable as steel tracks and may struggle to gain traction on loose surfaces.

The Bobcat’s finely tuned hydraulic system delivers smooth control and transition between different functions due to the attachment coupled at the end of its arm. The list of approved attachments for the Bobcat includes auger, buckets, packer, breaker, trencher, and plate compactor.

The Bobcat is a high-performance mini excavator that comes with optional  extendable arms. The Bobcat-made attachments are only compatible with the excavator. Again, like the arms, most of the advanced features are not standard.

It’s small enough to work on landscaped surfaces and even up inclined surfaces. The Caterpillar has two speeds, 1.4mph and 2.7mph, both are driven by a water-cooled, four-stroke, three-cylinder diesel-powered Caterpillar 3003 engine, delivering up to 17.4 horsepower.

The Caterpillar also has high and low traction options. This essentially allows you to determine how much grip you want. Additionally, the two-speed motor drives each of its tracks to allow flexibility. Whilst having a swing boom allowing you to see where you’re digging, the overhanging tail makes it difficult to maneuver in small spaces.

The Caterpillar also comes with two nice housing options. For cab and canopy, you’re given ample storage space and a coat hook. When equipped with the cab, other features such as a heater, defroster, interior lights and windshield wipers are included. Though, you do not get many of the features seen in other cabs, such as air conditioning, radio, keyless start and colour display.

Although The Caterpillar 301.5 is not the lightest or the most powerful excavator, it’s able to replaced full-sized excavators and light enough to work on delicate surfaces. The only drawback is the overhanging tail and fixed undercarriage that may affect stability and maneuverability working in tight spaces.

The John Deere is actually quite heavy considering it’s a mini excavator. Though, with its spacious interior and powerful engine, it is justified.

It runs on a 1.6 litre, four-cylinder Yanmar diesel engine, delivering 36 horsepower and 92 pound-feet of torque and revs up to 2,400 rpm. The engine is also very efficient despite its size, as its exhaust uses recirculation technology along with an auto-shutdown feature.

John Deere is also faster than the average excavator. With a top speed of 4.2mph it is faster than most small excavators. The tail swing is also an important feature, as it comes in zero tail swing and reduced tail swing designs. Thus, reducing damage to the back of the housing and making it maneuverable in tight spaces.

Overall, the John Deere 50G is a powerful machine. Rivaling full sized excavators with a plethora of functions and features. The drawbacks come in the shape of being too expensive and too heavy for a compact excavator.

The Kubota is very light and only 9 feet long, making it very nimble but powerful enough for small construction sites.

Being 7.4 feet tall and 2 feet and ten inches wide, the Kubota leaves a small footprint. Following this, the Kubota allows you to adjust its track width from 2 feet 10 inches to 2 feet 4 inches. This makes it perfect to reach and drives into small areas.

Additionally, you can also change the width of the Kubota’s blade to make it narrow as the track and therefore usable in tighter spaces. Rubber tracks compliment its light weight and usability on delicate surfaces.

With a three-cylinder 44 cc diesel engine generating 10.1 horsepower, it’s definitely not the most powerful engine you can find. Though, considering it’s size, the functionality is high and it also complies with the US EPA’s 2008 Tier IV emissions regulations.

The Kubota has two speeds: 1.2 mph and 2.5 mph and even though it is an ultra-compact excavator, the Kubota has a spacious operator’s area with a long floorboard and paddles, contoured operator’s seat.

Overall, the Kubota delivers a lot for its size. With an adjustable undercarriage and capable of two-speed travel, it’s perfect for small excavation jobs. However, with no cab or canopy option, no shelter from rain or snow, lacking a heater and air conditioning. This is a machine that will not cope with large jobs but will be perfect for smaller projects.

Despite the Takeuchi branding itself as a small excavator, its tail overhands its track by a few inches. This will hinder its maneuverability, but its retractable undercarriage does help.

It has triple flanged rollers in its rubber tracks that uphold their structural integrity on any surface. Each track is 9 inches wide and 3 feet 9.5 inches long.

The Takeuchi applies a ground pressure of 4.3 pounds, making it rather lightweight for landscape jobs. The track’s frames are able to expand and retract and when fully extended, the width of the undercarriage is 51.2 inches – making it more stable in this mode. It can even retract to 38.6 inches if you need to go through narrow openings.

The Takeuchi comes in cab or canopy options. In both models, the operator’s station is spacious and comfy; it has large adjustable arm rests to help address user fatigue. It also includes visual display units that show engine rpm, fuel, hour metre and battery charge. It does lack in-cab features such as a heater, air conditioning, radio and colour displays.

The Takeuchi is not an especially fast or a very powerful excavator, but for its size it is speedy and does pack a punch. Despite being a conventional tail swing excavator, its retractable undercarriage makes it maneuverable in tight spaces. 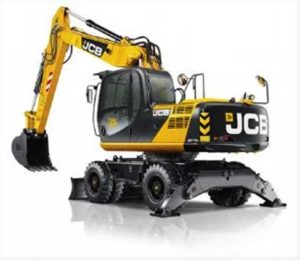 Coming in at roughly 17.5 tonnes, the JS175W is certainly one of the most powerful excavators we have here at Mteevanhire. It’s extremely resistant to impact damage, makes light work of heavy loads and has been perfectly engineered – premium industry stands, in fact.

It utilises an incredibly efficient Isuzu engine, has a 6.4m dig depth and a 0.90m3 bucket capacity, 10% improved fuel efficiency than the previous model and for a excavator, it’s actually very comfortable with a great cab design and excellent visibility.

There We Have It!

Hopefully this list has given you an insight as to what excavator best fits your job or project. Despite many new excavators hitting the market in 2017, we went with the ones that are still holding their own against the newer, machines. The main reason for this is simply because they have not been around long enough to effectively trial.